Recently I attended part one of a two part running clinic by Newton. The event provides information to runners on natural running style and the importance of proper form. The second part of the clinic allows the attendees to apply what they have learned from the lecture. Due to my injury, I did not attend the second day, but did learn a lot of useful information from the lecture that I would like to pass onto you.

If you haven’t heard of Newton, they are a shoe company that has developed a product based on, you guessed it, Isaac Newtons laws of motion. Not only do they make a great shoe, but this company also provides loads of information on the topic of running, offers coaching and coach certification, in addition to books, apparel, and other running accessories. 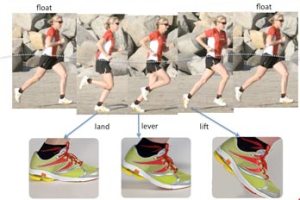 So let’s get down to the nitty gritty here……first thing is first, proper form. When running, the hips should remain level with an upright body and forward lean (from the ankles, not the waist). The spine should be straight, sternum lifted, shoulders relaxed, chin slightly tucked, with a slight flex at the hip.

It is important that the feet land under the center of mass no matter what. When stepping out in front and striking the ground on the heel, it’s as if you are slamming the brakes on a car. Deceleration occurs, thus increasing the chance of injury.

Check out this graphic for a visual.

Landing with the heel causes greater impact with the toes and ball of the foot. The shoe raises the height of the heel causing impact to come in and push off from this causes injury. Hmmm, this sounds familiar to me. I admit, I’m a heel striker and right now I am in a bad way with an injury in the ball of my foot and swelling of my second toe. I haven’t run in over a month and this lecture was really starting to make sense to me.

Ground contact time-this is the amount of time your foot is in contact with the ground on each stride. Faster runners have a shorter contact time. Ground contact time decreases as pace increases. If you are wondering why this is important, here is the answer: when you are in contact with the ground, you are not moving forward. It is only when you are airborne that you are propelled forward. So, a foot that lands in front of the body’s center of gravity will ultimately increase ground time. Ahhhh, that’s why my time hasn’t been improving!

So how should we be landing? Well, as mentioned before, below our center of mass. By doing so, you should land on the mid-foot reducing shock and allowing the heel to land naturally. Once this happens, the elasticity of muscles engage naturally creating and storing energy. Now you are ready to lift back of the ground almost effortlessly. View images here.

Check out some information on how to improve your running.

A couple of notes that I would like to address:

-I visited a podiatrist for my injuries and suggest fault on my behalf to due improper running style. I told him that I am a heel strikers and aware of the fact that I should be striking mid-foot. The doctors response? “That’s not accurate and doesn’t make a difference. You run how you run and don’t change a thing, you can’t change how you run.” AND, “don’t go buying those shoes with the toes, it’s just a fad.”

It was interesting to hear the doctors take on what I had suggested to him. He is after all a doctor, a foot doctor, he knows what he’s talking about right?

Don’t get me wrong, I have seen my fair share of doctors, especially over the past few years. During this time, I have learned that doctors don’t know everything and are sometimes just trying to figure things out just as much as we are. I’ve got to give credit to the doctor that fessed up and said, “I just don’t know, you are a mystery.” While this comment was a bit discerning, it was honest and I respect that.

Just because I now have my doubts about doctors opinions doesn’t mean that I will automatically discount what they have to say. I took his comments into consideration.

That being said, I’m almost certain that all of the professional runners which I follow and read up on have more knowledge in running than said doctor. Professional and mediocre runners alike often suggest the same running form-mid-foot strike!

If this is something you would like to try out, be patient. It takes time to adapt, a LOT of time. And new running form will come at ease with much practice. Remember-land, lever, lift!

Give it a go and if you get frustrated, feel free to keep in touch. I’ll be working on a new stride of my own!