I’m from Baltimore, I’m a Ravens fan. Please keep negative comments to yourself. With that said, woohoo!! Vegan running back Ricky Williams has just signed a two-year contract with the Baltimore Ravens.

Known for his dreadlocks, Williams started in the NFL with the New Orleans Saints later joining the Miami Dolphins. Forced into early retirement for failing a drug test, Williams  later stepped back onto the field and has scored 72 touchdowns.

Recently presented with the opportunity to join the Detroit Lions, Williams took up the offer to join the Baltimore Ravens. Having yet had a chance to make it to a Super Bowl, Williams states,

“The opportunity in Detroit opened up, and it would have been a chance for me to  play a lot and be able to contribute a lot, but Baltimore is  an established organization with a lot of vets, and … I thought I would fit in  well in this situation and be able to enjoy myself and possibly win a Super  Bowl.”

Williams says he has moved past his rebellious days and has presented a more conservative look having shaved off his dreads. 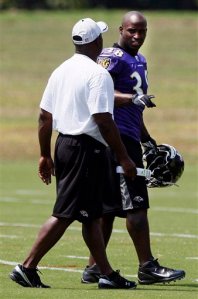 I have a feeling the veggies fueling number 38 will make him a fast player. Let’s go Ravens and like Williams said, get to the Super Bowl!